Edgar PÊRA (1960, Portugal) graduated in the early 1980s from the Film Academy in Lisbon and is now an established name in his country as an experimental filmmaker. Pêra has made countless documentaries, short films and features, but also focuses on making Internet productions, live shows and exhibitions.

This much is so certain one could call it scientifically proven: Edgar Pêra is the single-most greatest unknown master of modern Portuguese cinema. And no wonder looking at how cliché-happy international culture lm and otherwise is and always was: For Pêra is unlike any other filmmaker from that so fertile country at Europe’s western-most reaches – and unlike anybody around anywhere else for that matter. Pêra is a genuine original – and if (film) culture dreads one thing, nowadays maybe even more than ever, then it’s the artist one cannot de ne by way of facile comparisons and generalizations, explain through simple similes, box into this genre or that aesthetic. And even if Pêra is never shy about his inspirations, role models and heroes many of whom he references or quotes in extensis in his films (let’s mention ao. Dziga Vertov, Robert Anton Wilson, Branquinho da Fonseca, Rudy Rucker, Fernando Pessoa...), his works never feel debt-leaden; Pêra creatively continues all their arts, ideas, notions by transforming them into something different and new – without ever feeling the need to destroy them. Is this a paradox? Maybe, but so be it for the paradox are Pêra’s favorite dogs. (He relishes and delights in nonsense like this!...) Take his latest bundle of works: the documentary/portray O Homem-Pykante – Diálogos com Pimenta, the fiction feature Caminhos Magnétykos, the still-unfinished and in some ways impossible to finish essay KINORAMA - Cinema Fora de Órbita (Self-Propaganda Mix) and the cinekoncert Lovecraftland: all done or finished 2018/19, all punk’ish furies, all DaDa-plays with forms and expectations, all AV- acts of surrealist subversion – creative disturbances of what’s considered commonsensical, the generally accepted. Mark: The Pêra-project is a stridently political one, starting with his early works connected to Lisbon’s then-vibrant alternative/underground music kulture (which form the back-bone of his current multi-part TV-documentary project Arquivos Kino-Pop); Pêra’s works in Super-8 and video helped shape the identity of this dissident universe, preserved its memory, honored its immediacy. Like Alberto Pimenta, the protagonist/center of O Homem-Pykante – Diálogos com Pimenta, or singer/songwriter Nel Monteiro, the one-man greek choir of Arquitectura de Peso. Uma cine-sinfonetta muralista (vox populi vivace) (2007), Pêra is a true disobedient, and he never holds back, not even in projects where others might tread lightly as they’re connected to major institutions; Stadium (phantas- Mix) (2005) and Arquitectura de Peso. Uma cine-sinfonetta muralista (vox populi vivace), both commissioned works for by prestigious exhibitions/event, leaves no doubts about Pêra’s ideas concerning costly follies like Braga’s Estádio Municipal or EXPO ’98... Which gets us to another key element of Pêra’s praxis: He loves to work, and he grabs at every opportunity he gets; for each commission - be it a prestige ad for a limited edition of gourmet fish cans like Mar Portuguez (2016), or a creative bit of tourism-enhancing promotion like Delírio em Las Vedras (2016), or a documentary made to be screened as part of an exhibition like A Cidade de Cassiano (1991) - can be turned into something interesting, or is at least a good-enough reason to try stuff out (test a camera, some lm stock etc.). The arguably most outrageous cum outré example for this is Virados do Avesso (2014), a burlesque in the original sense of the word that became a box office sensation – and happened only because Pêra accepted an implicit challenge by one of his producers to make a piece of popular entertainment; and that, nobody expected from Pêra, N-O-B-O-D-Y! It helps that Pêra is a restless soul, and mighty impatient with his own œuvre – again and again he’s reworked many of his films; even those who can claim to know his films well can never be sure what they’re going to see when they re-watch something; Rotterdam 2019 eg. he took as a reason to rework Manual de Evasão LX94 – Investigação Trans-Temporal (2019/2012/1994) Zombietown 23 (1998/2019) and Lisboa-Boa 345 D.T (Remix 2018) (2000/2019). All that said: Pêra’s art is a people’s art, even if one wouldn’t immediately think so, blinded by bourgeois pretentions and prejudices as we too often are. Pêra is with the people - the miners (O Trabalho Liberta?, 1993), the football fans (És a Nossa Fé, 2004), the war- maimed (guerra ou paz?, 1992), and his lms are soaked in all kinds of popular culture, be it local comedies (A Janela (Maryalva Mix), 2001), carnival (Delírio em Las Vedras), comics (Guerra ou Paz?), music (every single work he ever did). For Pêra understands cinema as a gigantic, ongoing and unstoppable experiment a filmmaker conducts together with his audience, the people. It is not an accident that the gaudy audience of his grand essay on cinema’s essence: O Espectador Espantado (2016), is its protagonist – and that the 2019 IFFR audience will be the hero of its sequel: KINORAMA - Cinema Fora de Órbita (Self-Propaganda Mix), which they can help shape. Olaf Möller 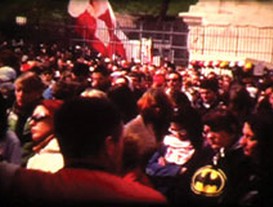 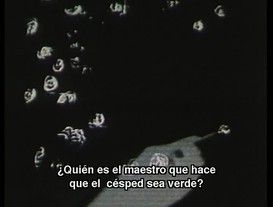 Who is the master who makes the grass green?