Antonio's story is one among the many stories of a person trying to survive the gentrification of El Raval, a traditionally working class neighbourhood in the centre of Barcelona. Antonio makes ends meet by recycling his finds and swapping things, while also giving things away to people who are in need, the homeless, poor people and migrants... all in all, he is a small focus of resistance to the ruthless capitalism that is slowly taking control of our lives.

Antonio is seventy one years old. He lives in calle Robadors in Barcelona's Raval and drives around in his van collecting junk and materials he finds on the street, to fix what he can and sell it in his shop. People in the neighbourhood like and respect Antonio. Some want to organise a petition so he can stay, so he doesn't get thrown out. He says the neighbourhood is changing, rents are going through the roof, where are my wife and I going to go? Antonio keeps the food that shops and supermarkets give him and hands it out to those who need it, usually foreigners... because he was also a migrant in another country once. 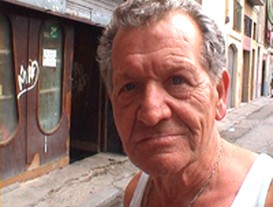