Something happened on the Spanish-Moroccan border in Autumn 2005. A thing that is still happening today in other places and in other ways. Hundreds of sub-Saharans used ladders to cross a European border. Weapons, rubber bullets, death. Thousands were deported to the Sahara desert. Death. Spanish television broadcast images of an accelerated war. Just bodies, not individuals. Something we watched. Returning to the place where it all happened we find nothing but empty space. A landscapes without traces. What remains, that fence. How is it possible to create new representations that don't get lost in the oversaturation of images that present migrants as victims? Others had already asked themselves the same question. A group of Congolese refugees is stuck in Morocco waiting to reach Europe. They have created a theatre piece based on their experiences of migration. In the room where they live each day, it takes shape as a self-representation of each step along the path. But it is not a finished work. There is no audience and no stage, just a work waiting for its ending. 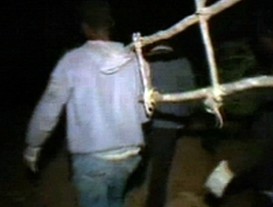 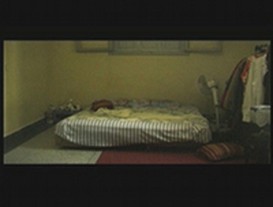 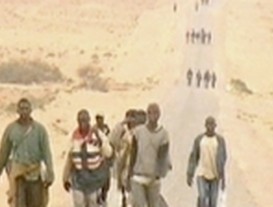