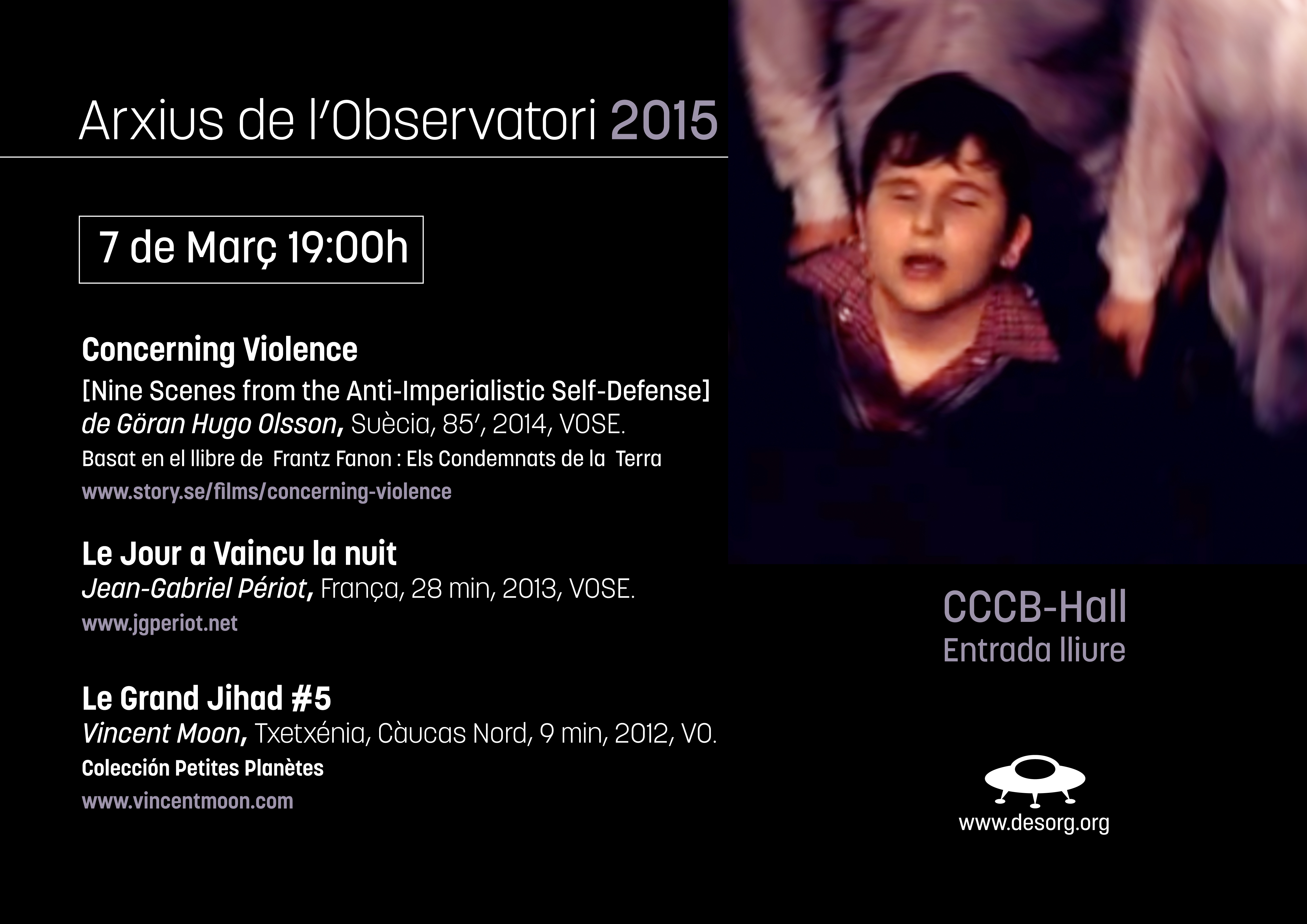 OVNI opens up public access to the Intranet of the Observatory Archives, founded in 1993. To launch this new phase, we will screen a programme of videos that establish the two poles of this project, which span from social critique at one end, to personal exploration at the other. Concerning Violence by Göran Hugo Olsson with texts by Frantz Fanon, Le Grand Jihad by Vincent Moon , a ritual around memory, and Le Jour a Vaincu la nuit, by Jean-Gabriel Périot, another around dreams.

OVNI opens up public access to the Intranet of the Observatory Archives, founded in 1993, at the CCCB. The collective behind OVNI considers that audiovisual creation (video art, documentary, and media archaeology) is more than just a creative, innovative, and aesthetic discourse... it is the most contemporary and non-elitist reflection on today’s culture and society.

It is a collective visual thinking that reflects social, personal, poetic and political realities... flowing smoothly from reality to fiction. And its specificity makes it both a device for the construction of imaginaries and a tool for deconstruction.

In The Society of the Spectacle, Guy Debord wrote that when reality is captured and turned into mere images, these images become reality: a mechanism that consolidates the unreal core of our reality. It seem to us then, as a counterpoint, that reality itself is at stake in the creation and dissemination of images. This is why it is necessary to develop an independent audiovisual discourse: independent of commissioning dynamics, independent in regard to the choice of subject matter and the approach, and above all independent of the prefabricated norms and grammars of the audiovisual industry and its consumption and production criteria. This entails a differential defence of the perception of reality. The mechanisms of cloning and the monoform (Peter Watkins) are countered by a rhizome of unique approaches, overlapping coincidences and disparities that do not exclude contradiction, but instead value it as the presence of reality in the images.

Fortunately, the same market logic that flooded the landscape with banal images and with devices for recording, editing, and spreading images has also enabled the democratisation of access to the means of production and has broken the audiovisual oligopoly, downplaying the importance of the big mainstream channels.
However, we need to take advantage of this window of possibility, which may remain open for a shorter time than we imagine. He have to go beyond the fog of compulsive images that flood the networks, and pierce the veil of media images, the master copy of the film that aims to reduce reality to the order of representation, and individuals to a handful of stereotypes.

This process of audiovisual dissidence and resistance has been, and remains, fundamental. The mirror of representation has shattered into thousands of fragments: pieces that are deep cuts in reality and at the same time reflections of it.

We suddenly enter a complex rhizome (Deleuze_Guattari) of stories that reflect plural reality. A discourse in which the principal values are heterogeneity, contradiction, and subjectivity. An antidote to the cloning and repetition of the corporate mass media. In this rhizome made up of disparate visions, the vision that the mass media presents as objective reality is deconstructed, and revealed as the subjective imaginary of the dominant discourse.

We could say that there is a conflict of imaginaries. On one side, the omnipresent, formidable machine for the production and dissemination of prefabricated messages, creating a range of versions based on the same basic pattern as any other consumer product: to maximise profits and ensure its own continuity. On the other side, a kind of artisan patchwork of personal or collective experiences, a patchwork that has been torn in places and is full of life.

Fragment of the article-interview on OVNI by the magazine:

“In an age where show business – too often mistaken for the world of culture - has become a model for real life, where fiction and reality melt into the one solution, and where physical and mental solidity dissolve into a continuous flow of images and appearances, here, in this intricate and complex mutation of reality, the work of OVNI offers an antidote to the poisons of contemporary information and communication. For over twenty years, it has been a “Temporary Autonomous Zone” – as Hakim Bey, collaborator of one of the editions of OVNI, would say –, presenting an intense programme of video art, independent documentary and mass media archaeology at the CCCB in Barcelona and beyond. The in-depth research carried out by OVNI clearly shows how independent audiovisual productions are gaining increasing visibility and international recognition and, at the same time, they are devices that are highly critical of contemporary culture and society."

The launch of this Intranet of the OVNI Archives at the CCCB makes approximately 2000 audiovisual works – the entire holdings of the Archives – available to the public. A collection of works that we will continue to build on with new acquisition, as in the case of the works screened at the launch, which will be incorporated into the archive.

The Observatory Archives: A tool.

Over the last few years, various developments have forced us to review our project, leading us to closely examine the real characteristics and functionalities of other parallel projects: how they work and how they are used.

It is necessary to think critically about what archives are, and about the value of an archive. This is the case now more than ever, against the backdrop of the compulsive creation of numerous Archives over the past ten years, most of which are based on accumulative criteria: either the accumulation of existing dominant values (a "who's who" of a particular audiovisual scene) or simply a quantitative accumulation. In contrast, the OVNI Archives are the result of specific reflection on a continuum of themes that have been crucial in recent decades; a reflection that has been woven into the works themselves, in a kind of meta search. We could say that they are archives with a thesis; they have gone against the flow of dominant thinking and fads.

At the same time, there is only limited value in archives that can be consulted but are isolated and fossilised. Archives become valuable when they can be read, when they can create meanings, suggest transversal readings and intersections. Being accessible to the public is one condition that allows this, but it does not guarantee or facilitate it. It is the knowledge generated by the Archives, and above all, the knowledge that has been generated through them, that makes it possible to make the most out of them: as a base from which to organise workshops, debates, specific programmes... This is the project that we are working on; the launch of this Intranet is only the first step.