The title Time Like Zeros is taken from a comment by one of eight female prisoners who narrate the film, as she contemplates the life sentence stretching ahead of her. It is echoed visually in the camera movement that encircles the prison, and in the circles of razor wire that whiz by as the scene moves from the exterior fence to the darkest cells of the prison. A sense of community and compassion can be sensed in the women's voices, yet contrasts with the footage shot by guards as they chain down a woman in the segregation unit. 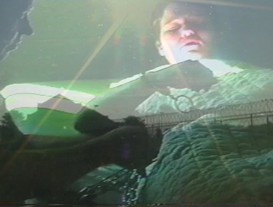